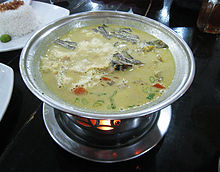 Soto Tangkar has been famous for a long time. Made by the Betawi people during the Dutch era. It is said that this soup is the people’s soto for the lower class. Due to the use of ‘tangkar’ or commonly called ribs with a little part of the meat as the main ingredient. In the past, this soup was sold in a pole around the village like a meatball seller.

The use of ribs is because during the colonial era, the economy was still unstable, and many people still couldn’t afford beef. Only rich people in their time could buy beef, while ordinary people only needed to use the pieces of tangkar cooked to resemble Soto Betawi. The coconut milk used is also not as thick as the Soto Betawi, so the taste is much lighter and not too tasty.

Over time, Soto Tangkarpun has grown. Not only using ribs, but also offal such as tripe, iso, gravel, and others. Soto Tangkar is indeed quite difficult to find, but several Betawi restaurants still serve it.

For those of you who are curious to try, there is nothing wrong with trying this Soto Tangkar when visiting the city of Jakarta. Come on, remain loyal readers of Indonesiar.com.

What Are Some Famous Traditional Indonesian Foods Using Pork?

What Are the Types of Traditional Sambal (Chili Sauce) From Indonesia?

What are the other names for Sambal Terasi in Asia besides Indonesia?

What Is Compote (Kolak)? What is this typical Indonesian food like?

Why is there a Javanese Tribe Community Living in the Americas?

Fairy Tales of the Origin of the Papua Merem Population