Indonesia has an interesting variety of handicraft products. One of the interesting handicrafts is Noken. What is Noken? Noken is a traditional bag that has various functions for the Papuan people who are carried with their heads or carried. Original papua noken is usually made of bark fibers.

Papuan people usually use Noken for various things such as to carry babies (usually the inside of the noken is covered in soft cloth), carry agricultural products, carry merchandise and as an alternative to bringing learning equipment or supplies to school or to campus.

In the cultural philosophy of the Papuan people, the traditional Noken bag has a symbol of good life, peace, and fertility for people in Papua, especially mostly in the Central Highlands of Papua such as the Mee / Ekari, Damal, Yali, Dani, Lani and Bauzi tribes.

What’s interesting about this Noken is that only Papuans can make Noken. Since childhood, women in Papua must learn to make Noken, because making Noken from the past until now can symbolize the woman’s maturity. Because if a Papuan woman cannot make Noken, she is not considered an adult and that is a condition for marriage. Noken was made because the tribes in Papua needed a container that could move goods to another place.

Noken is made from the raw material of Manduam tree wood, Nawa tree or forest orchids and many other types of trees that are commonly used. Papuan people usually use Noken for various activities, large Noken (called Yatoo) are used to carry items such as firewood, crops, groceries, or even to carry children. medium-sized ones (called Gapagoo) are used to carry groceries in moderation, and small ones (called mitutee) are used to carry personal items. The uniqueness of Noken also functions as a memento gift for guests who are usually for the first time setting foot on Papua soil and are used in ceremonies. 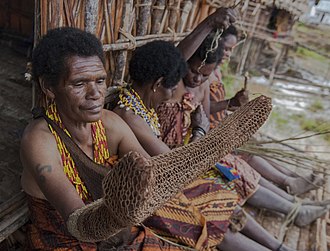 The sale of Noken bags in Papua is very much available in the Papuan indigenous market. Noken is also sold in various sizes and of course varied. Sales of noken are also available outside Papua, but usually those who sell these traditional bags are some students or native Papuans living outside Papua.

Usually Papuan people who become noken craftsmen outside of Papua sell their art only to introduce Papuan culture and get income that is used to support study costs. So, are you interested in trying to have a creative original Papuan product? If you are interested, just buy.