Indonesia is a country that has a variety of culinary or traditional foods. One of them is Lemang. What is lemang? Lemang is a traditional food made from glutinous rice which is cooked by roasting. In the process of making lemang, it looks easy but difficult to work with.

Because the process of making lemang does not only burn glutinous rice. However, there are several steps and processes to make lemang feel soft and tasty. Making the lemang using bamboo media. The bamboo used is the bamboo of choice, where the bamboo should not be too thick in size so that the lemang cooking process does not take that long and ripens evenly. 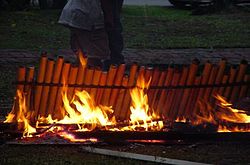 Furthermore, the bamboos that have been filled with glutinous rice and doused with coconut milk are placed in a stove that is specially assembled for burning. The fire used to bake the lemang cake should not be too big or too small. During the roasting process, the position of the bamboo must be changed continuously so that the sticky rice in it cooks evenly. 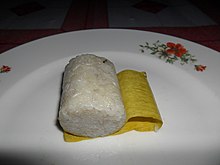 This lemang is usually sold during the month of Ramadan. It is also sold for the normal month, but not as much as in the month of Ramadan. So, are you interested in eating traditional foods that are characteristic of the food of several tribes on the island of Sumatra? Come on, take your exciting holiday by visiting Indonesia.