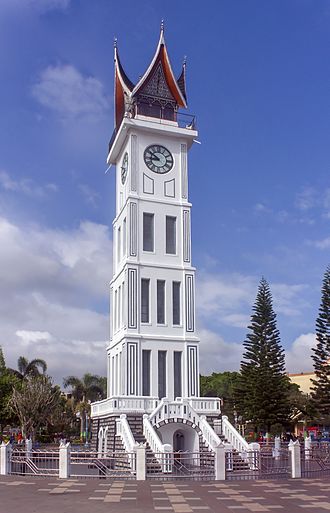 This building has a basic building size of 6.5 x 6.5 meters, a basic size of a 4 meter wide staircase and a basic building size of 6.5 x 10.5 meters. The 36 meter high clock tower consists of several levels, with the top level being the pendulum storage. The pendulum was broken and had to be replaced due to the earthquake in 2007. There are 4 clocks with a diameter of 80 cm each at the Clock Tower.

The clock is imported directly from Rotterdam, the Netherlands via the Teluk Bayur port and is driven mechanically by a machine that is only made in 2 units in the world, namely the Clock Tower itself and Big Ben in London, England. The movement and clock face are located one level below the top level. On the chime is the watchmaker Vortmann Relinghausen. Vortman is the last name of the watchmaker, Benhard Vortmann, while Recklinghausen is the name of the city in Germany where the movement was manufactured in 1892.

Based on the history of this historic building, the Jam Gadang was built in 1926-1927 at the initiative of the Rookmaker, the city secretary or controleur Fort de Kock (now Bukittinggi City) during the reign of the Dutch East Indies. The clock was a gift from the Dutch Queen Wilhelmina. The architecture of this clock tower was designed by a native architect named Yazid Rajo Mangkuto from Koto Gadang, while the constructor was Haji Moran with his foreman St. Ameh’s Teeth.

The groundbreaking of the construction was carried out by the first son of the Rookmaker, who was 6 years old at the time. The construction cost about 3,000 guilders, a cost which for that time was quite fantastic. According to a source, the Jam Gadang was completed in 1932.

Since its establishment, this clock tower has become the center of everyone’s attention so that it is used as a marker or landmark for the City of Bukittinggi. Around the Clock Tower, there used to be a park called Wirasakti.

When the news of the proclamation of Indonesian independence was announced in Bukittinggi, the red and white flag for the first time was raised at the top of the Jam Gadang, after going through a conflict with the top leadership of the Japanese army. The young man who led the crowd to raise the first Sang Saka Merah Putih at the top of the Clock Tower was named Mara Karma.

Since its foundation, the clock tower has undergone three changes to the shape of the roof. Initially founded during the reign of the Dutch East Indies, the roof at the Clock Tower is round with a statue of a rooster facing east on it. Mr. Controleur Rockmaker (founder of the Jam Gadang) meant that the Kurai, Banuhampu, and Sarik Sungai Puar people wake up early when the cock crowed.

Then during the Japanese occupation it was converted into a pagoda form. Finally, after Indonesia’s independence, the roof at the Jam Gadang was changed to a gonjong or roof in the Minangkabau traditional house, Rumah Gadang.

The last renovation carried out at the Clock Tower was in 2010 by the Indonesian Heritage Conservation Agency (BPPI) with the support of the Bukittinggi city government and the Dutch Embassy in Jakarta. The renovation was inaugurated right on the 262th anniversary of the city of Bukittinggi on December 22, 2010.

In July 2018, the Jam Gadang area was revitalized by the government. The construction cost Rp. 18 billion and was completed in February 2019. So, a tour to West Sumatra is incomplete without visiting this historic building called the Jam Gadang. Come on, take a trip to Indonesia after this pandemic outbreak ends.

Best Tips for Climbing Mountains in Indonesia Despite the Pandemic

Safe and Fun Vacation in Indonesia During the Covid-19 Pandemic

How to Manage Visa Extensions in Indonesia During the Pandemic?

What are the advantages of the Indonesian nation originating from South Sumatra?

Who is Carl Wilhelm Ottow? Why he can travel to Papua?

Why do Indonesians from East Nusa Tenggara have a Portuguese clan?