Home Food Getting to know Lepet, a traditional snack food from Indonesia

Lepet is a traditional Indonesian food originating from the island of Java. This traditional food is a snack food. Lepet is similar to lemper and lontong, although the difference is that the texture is more tough and sticky because it uses sticky rice, and has a more savory taste because it is mixed with coconut milk and nuts.

Then half-cooked sticky coconut milk is mixed again with grated coconut meat and peanuts then wrapped in a coconut leaf (young yellowish coconut leaf) in a cylinder shape and tied with a rope made of coconut leaf fibers. 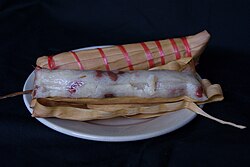 The rice in the coconut leaves is then steamed again until it is completely cooked. The most common filling is peanuts, but other types of beans such as kidney beans, cowpeas, jackfruit, or corn can also be used.

This snack food has a delicious taste and has a pandan aroma. This traditional snack food is better to eat when it’s still warm. So, are you interested in trying to eat this traditional food? Come on, visit Indonesia.

Get to know Ludruk art as a traditional Indonesian culture

Bob Wrestling As One Of Indonesia’s Traditional Sports From Papua