Indonesia has some delicious traditional food. Delicious food is not only food that will fill your stomach but also a lot of snacks. Apart from crackers, Indonesia also has other traditional snack foods.

One of the famous snacks in Indonesia is Emping. What is Emping? Emping is a traditional snack food in the form of chips processed from the seeds of melinjo or belinjo (). These traditional chips actually have a slightly bitter taste. In markets throughout Indonesia, of course, this traditional snack is very easy to find with a variety of flavors, such as tasteless, salty, spicy or sweet.

Chips are produced in a cottage industry, traditionally made by hand in a labor intensive process. Melinjo seeds are roasted over medium heat without oil, or sometimes using sand as a medium.

To simplify the process of producing chips, melinjo seeds are usually boiled before peeling them. The soft outer skin as well as the tougher inner shell are peeled off by hand.

One by one the melinjo seeds were beaten with a wooden hammer-like tool or pressed with a stone cylinder to make the chips flat and round. After being crushed, the chips were then arranged in trays made of shiny bamboo and dried for a day.

Each chip chip is usually made from a single melinjo seed, although there are variants that combine several seeds to make larger chips that look like crackers. These large chips are often mixed with other types of starch, such as corn flour or tuber starch

There are two types of chip thickness on the market, thin and thick. Thin chips usually have a plain or salty flavor, while thick chips are usually sweet, coated with caramelized sugar or seasoned with cayenne pepper.

The dry chips are collected, packaged and sold in the market. Raw chips bought from traditional markets, it is better to dry them first to reduce the moisture, then fry them in a lot of cooking oil until they expand, become crispy and turn golden yellow.

The production of this traditional snack food is already a lot in Indonesia. For those of you who want to try eating chips directly, they are usually available in a ready-to-tap condition at snack shop outlets, supermarkets, village stalls and restaurants in Indonesia. packed, ready-to-eat chips are also available. 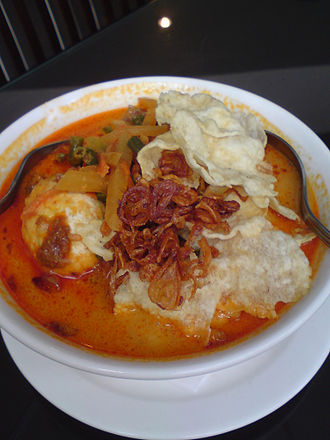 Apart from being a traditional snack food, Emping is also often added as a topping for soup, uduk rice, oxtail soup, gado-gado, lontong sayur, fried rice, yellow rice, laksa and chicken porridge. So, have you ever tried this traditional snack food from Indonesia? If you haven’t, of course try to eat it when visiting Indonesia.

History of the Origin of the City of Solo in Central Java, Indonesia

How to Easily Express Love and Affection for Couples?